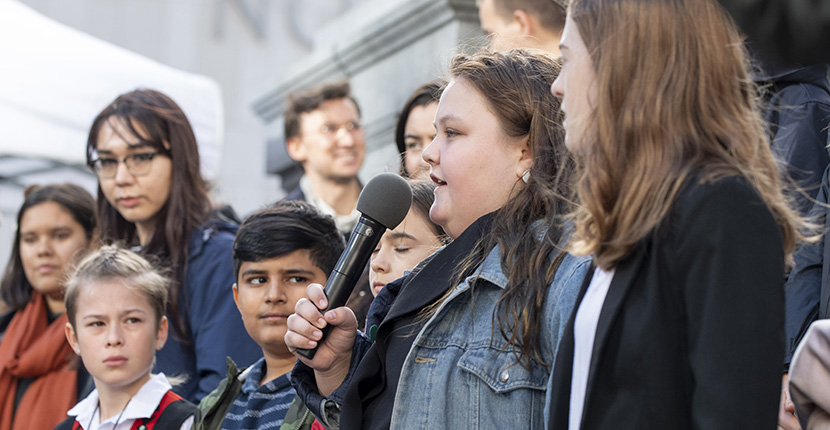 VANCOUVER, B.C. — A Federal Court judge ruled that the Canadian government will not go on trial under his watch for its contributions to climate change, with youth plaintiffs in La Rose v. Her Majesty the Queen notified today that they must first take their request to a higher court.

In spite of acknowledging that “the negative impact of climate change to the Plaintiffs and all Canadians is significant, both now and looking forward into the future,” Justice Michael D. Manson of the Federal Court of Canada granted the government’s motion to strike the plaintiffs’ claim.

Justice Manson acknowledged in his decision that the Public Trust Doctrine is a justiciable issue and “clearly a legal question, which the Courts can resolve.” In addition, he clarified that his “comments above are not to be taken as suggesting that the Defendants should not be responsible or unaccountable in addressing climate change. The Defendants acknowledge that climate change posses [sic] a serious societal issue of our times, requiring responsiveness from all stakeholders.” However, he still ruled that the courts were unable to advance the case on the basis of justiciability, “…no matter how critical climate change is and will be to Canadians’ health and well-being, which is acknowledged.”

Plaintiffs’ lead lawyer Joe Arvay, Q.C. said that despite the decision, “we maintain confidence in the strength of our claim and intend to appeal.”

Sophia, one of the youth plaintiffs, called the decision “a slap in the face and a big wake-up call for all Canadian and Indigenous youth. Canada has tried to silence our voice in court and block our calls for climate justice. We won’t be dissuaded. I, along with my co-plaintiffs, will continue to fight for the Charter rights of all Canadian and Indigenous youth to hold Canada accountable.”

Mikaeel, an 11-year-old plaintiff, noted that “as someone who can’t vote, realizing that my only protection is not something that I can rely on is disappointing.”

In 2019, the 15 plaintiffs – who range in age from 10 to 19 – filed suit alleging that the Canadian government causes, contributes to and allows dangerous levels of greenhouse gas emissions, and therefore is responsible for climate related harms they are experiencing.

The La Rose case asks the court to declare that Canada is interfering with the youth’s Charter rights to life, liberty, security of the person and equality, and calls on the court to order the government to prepare and implement a plan to reduce its greenhouse gas emissions in a manner consistent with the best available science.

“I am incredibly disheartened by the court’s ruling,” said youth plaintiff Lauren, 16. “As a young Canadian whose rights are being violated, having the court grant the government’s motion to strike is very upsetting, and I feel that my rights to a safe and healthy future are not being taken seriously by those in power.”

The plaintiffs, who come from seven provinces and one territory, are already being harmed by the government’s contributions to dangerous climate change by being exposed to deadly wildfire smoke, sea level rise, extreme temperatures, more frequent hurricanes, and other devastating personal impacts.

In his ruling, Justice Manson said his concern was not that the plaintiffs are asking that the court “consider a network of Canada’s actions and inactions related to climate change, but with the undue breadth and diffuse nature of that network, which puts Canada’s overall policy choices at issue.”

Justice Manson added that, although the case would be “based on scientific data and the assessment of that data,” he believed the questions raised in the case “are so political that the Courts are incapable or unsuited to deal with them.”

Andrea Rodgers, Senior Litigation Attorney with Our Children’s Trust, said, “It is an affront to justice that when children are being harmed by specific legal actions their government has taken, they have no recourse. It is a sad day for Canada and democracies around the world, and judicial restraint in the face of the climate crisis will one day be seen as one of the world’s great follies. For these children’s sake, we are hopeful that this miscarriage of justice will be corrected on appeal.”

Attorneys for the youth plaintiffs will appeal today’s decision. As noted by 16-year-old plaintiff Haana, “The decision to strike all claims is disappointing but not discouraging; what we are doing is important work, and there are many next steps ahead.”

Sadie, 14, said, “I’m concerned for my future, the future of the world and the future of Canada if we continue to act like we are now. I need this case to continue for the safety of all the young people in Canada. But, this case is not over. Us young people will never stop fighting for our future.”

“Of course this decision is disheartening, but the journey is far from over,” David Suzuki Foundation CEO Stephen Cornish said. “These brave young plaintiffs aren’t done calling for an adequate, science-based climate recovery plan in Canada. They know we only have a decade to turn things around and that, so far, we’re not on track. These kids are on the right side of history. They deserve their day in court.”

Partners for support of the Canadian youth plaintiffs include:

Our Children’s Trust is a non-profit public interest law firm that provides strategic, campaign-based legal services to youth from diverse backgrounds to secure their legal rights to a safe climate. We work to protect the Earth’s climate system for present and future generations by representing young people in global legal efforts to secure their binding and enforceable legal rights to a healthy atmosphere and stable climate, based on the best available science. We support our youth clients and amplify their voices before the third branch of government in a highly strategic legal campaign that includes targeted media, education, and public engagement work to support the youths’ legal actions. Our legal work — guided by constitutional, public trust, human rights laws and the laws of nature — aims to ensure systemic and science-based climate recovery planning and remedies at federal, state and global levels.

The David Suzuki Foundation is a leading Canadian environmental non-profit organization, collaborating with all people in Canada, including government and business, to conserve the environment and find solutions that will create a sustainable Canada through evidence-based research, public engagement and policy work. The Foundation operates in English and French, with offices in Vancouver, Toronto and Montreal.

The Pacific Centre for Environmental Law and Litigation (CELL) is an educational partner in the La Rose case. Through innovative experiential learning opportunities gained by working on the case, CELL students are trained to become effective defenders of the environment and the rule of law. For more information about CELL and this case, please visit https://www.pacificcell.ca/youth-climate-lawsuit/.