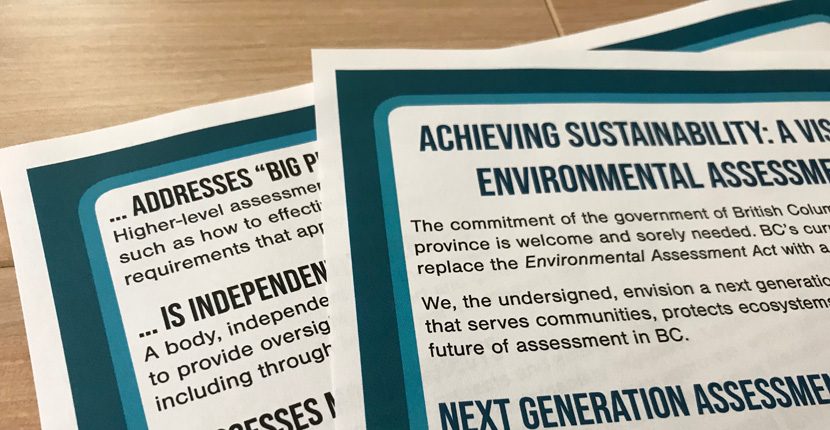 The groups, who welcome BC’s commitment to EA revitalization, presented BC Environment Minister George Heyman with their “vision for next-generation environmental assessment in British Columbia,” which lists 14 requirements for an assessment law that will build public trust, and advance reconciliation and sustainability.

“It’s time for a new approach, and a new law to replace the outdated BC Environmental Assessment Act,” said Anna Johnston, Staff Lawyer with West Coast Environmental Law Association. “Groups from all over the province agree that major changes are needed to strengthen the law and make assessments work for the environment and affected communities.”

The vision set out by the groups outlines the potential of a next-generation EA law that establishes sustainability as a core purpose and outcome, recognizes Indigenous decision-making authority, ensures that BC meets its climate targets, and addresses “big picture” issues – such as managing the cumulative effects of development in a region. The organizations also say assessments must be led by an independent body, involve the public, and require decision-makers to demonstrate that their decisions are based on science and Indigenous knowledge.

“Collectively our organizations have been involved in numerous environmental assessments over the years under the current BC law,” said Pat Moss, Executive Director at the Northwest Institute. “In our experience the existing assessment process lacks transparency, accountability and credibility, fails to meaningfully engage and inform the public, and leaves lands, waters and communities vulnerable from poorly planned development.”

A recent report from West Coast Environmental Law, Why It’s Time to Reform Environmental Assessment in British Columbia, highlights a number of these voices and concerns.

“It is time for a law that moves beyond checking process boxes, to substantively protecting the environment, human well-being, and Indigenous title and rights from unsustainable development,” said Johnston. “Building an EA system that British Columbians can trust will help the government avoid future disputes over controversial proposals like the Site C Dam or New Prosperity Mine.”

BC launched its process to review the provincial EA regime in March 2018 and is expected to release a discussion paper on EA revitalization soon.