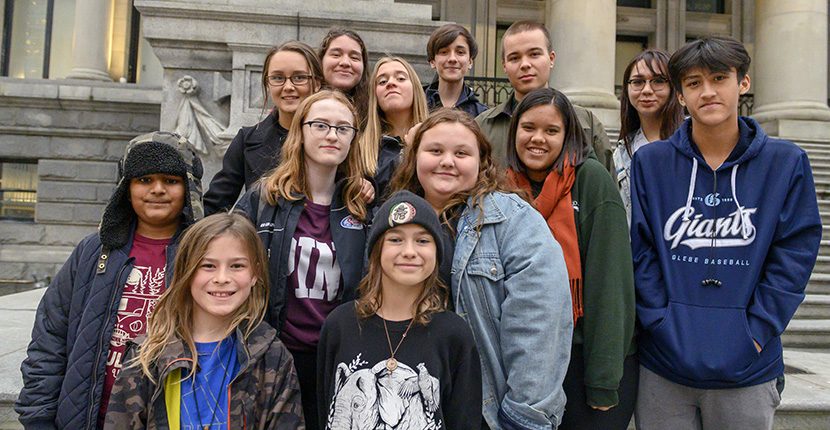 The plaintiffs in La Rose et. al. v. Her Majesty the Queen are seeking to hold Canada accountable for contributing to dangerous climate change and discriminating against youth

VANCOUVER, B.C. — On Friday, February 7, 2020, the federal government of Canada (“Canada”) filed its Statement of Defence in the youth-led climate change lawsuit, La Rose et. al. v. Her Majesty the Queen (“La Rose”). In this defence, Canada acknowledges that climate change is real, that it has significant negative impact on Canadians, and that addressing climate change is “of central importance to the Canadian government.” However, Canada claims that the 15 young Canadians should not be given public interest standing and that the courts are not the appropriate branch of government to provide the youth plaintiffs with their requested relief.

In its Statement of Defence, Canada’s admits:

Canada also does not dispute that the plaintiffs have suffered harm as a result of climate change. However, Canada intends to defend the case by claiming that the courts cannot review the government’s decisions about climate change:

Addressing climate change is the shared responsibility of a multitude of different actors… Only the executive and legislative branches of government may make policy, pass laws and authorize the allocation of public funds.

Although Canada has tabled a climate plan, the federal government has not yet fully implemented it – including passing the policies and laws the scientific evidence suggests are required to reduce greenhouse gas (GHG) emissions to safe levels; nor has it ceased pursuing counterproductive policies that in fact increase these emissions (i.e., consistent policy action in line with the current climate emergency).

The La Rose case was filed by 15 young Canadians from across the country on October 25, 2019. In the lawsuit, the youth claim that the federal government of Canada is contributing to dangerous climate change. The case also argues that the youth are already being harmed by climate change and the federal government is violating their rights to life, liberty and security of the person under section 7 of the Charter and for failing to protect essential public trust resources. The youth plaintiffs also allege that Canada’s conduct violates their right to equality under section 15 of the Charter, since youth are disproportionately affected by the effects of climate change.

The youth, from seven Canadian provinces and the Northwest Territories, are represented by the law firms of Arvay Finlay LLP and Tollefson Law Corporation, and are supported by the Pacific Centre for Environmental Law and Litigation (CELL), David Suzuki Foundation, and Our Children’s Trust.

The lawsuit calls on Canada to cease violating the youth’s Charter and public trust rights and prepare and implement a plan that reduces Canada’s GHG emissions in a manner consistent with what the best available science indicates is needed for the federal government to protect young Canadians, do its fair share to stabilize the climate system, and avert the catastrophic consequences of climate change.

CELL is a partner in this lawsuit to train the next generation of public interest lawyers to become effective defenders of the environment and the rule of law. Using this lawsuit as a vehicle for experiential learning, students enrolled in CELL’s educational program will gain hands-on experience in developing and running complex public interest cases and develop competencies and skills relevant to public interest legal practice.

Support CELL in training tomorrow’s environmental defenders by making a charitable donation today through our page on CanadaHelps.org.

For more information or to arrange an interview, please contact:

Counsel for Plaintiffs are Joseph J. Arvay, Q.C. and Catherine Boies Parker, Q.C. of Vancouver, BC, and Chris Tollefson and Anthony Ho of Victoria, BC.