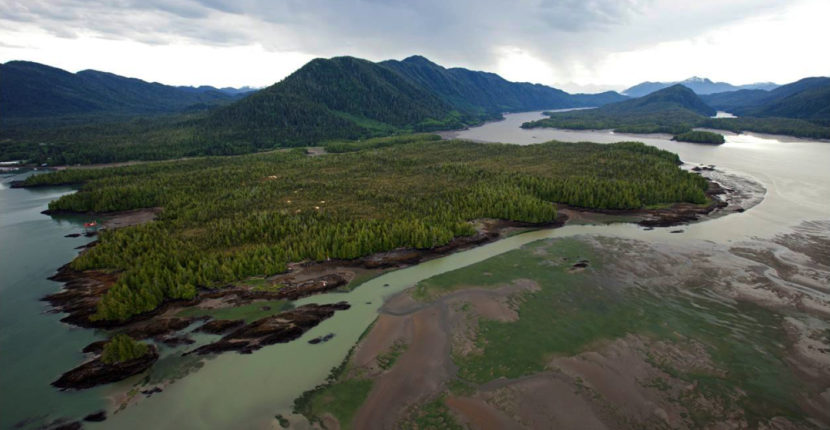 Today, lawyers with CELL filed an application for judicial review at the Federal Court on behalf of SkeenaWild Conservation Trust, a non-profit conservation organization based in northern BC. Along with other First Nations who have also launched legal action today, SkeenaWild is challenging the federal government’s approval of a $11.4 billion liquefied natural gas (LNG) project at the mouth of the Skeena River.

The Pacific NorthWest LNG Project is a proposal to build a natural gas liquefaction facility and export terminal on Lelu Island, adjacent to Agnew and Flora Bank. Hundreds of millions of juvenile salmon come down the Skeena River every year to rest in the eelgrass habitat found in these areas as they become accustomed to life in the marine environment. This estuary is one of the most sensitive and productive salmon habitats in North America.

We also challenge the Agency’s failure to do a cumulative effects assessment associated with the project’s greenhouse gas (GHG) emissions. If built, this project will be one of the biggest point-source emitters of GHG in Canada and be a significant obstacle to Canada meeting its GHG reduction obligations under the Paris Agreement.

The lawsuit also targets determinations made by the Minister of Environment and Climate Change and the federal Cabinet approving the project. We contend that, if the Agency’s report is invalid, then the approvals are invalid as well.

Today’s application for judicial review was drafted in collaboration with a team of six law students who are working with CELL this term as part of CELL’s educational program. Through working on this application, these law students obtained first-hand experience working with practising lawyers in reviewing the evidence, interviewing clients and experts, doing legal research, strategizing legal arguments, and drafting pleadings for the case.