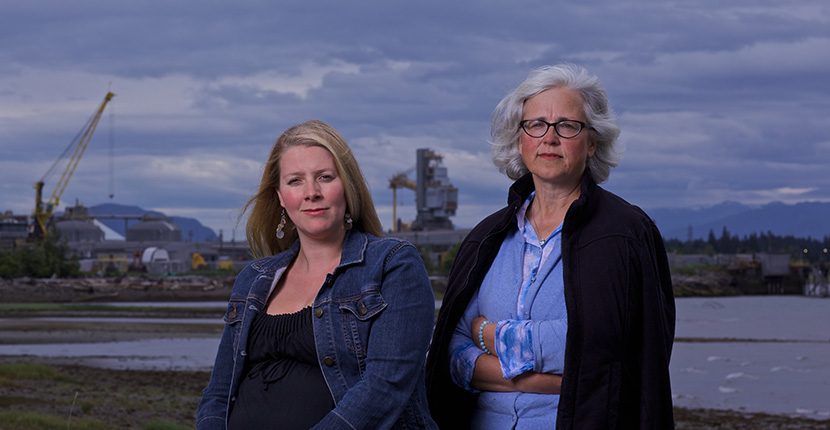 It’s one of those classic David versus Goliath stories. For six years, Elisabeth “Lis” Stannus and Emily Toews, two elementary school teachers in the remote community of Kitimat in northwestern British Columbia, have been fighting a legal battle to protect their local airshed from increasing air pollution. On the other side of this battle were the BC Ministry of Environment (MOE) and Rio Tinto, one of the world’s biggest metals and mining companies.

Rio Tinto owns and operates an aluminum smelter in Kitimat and is the town’s biggest employer. This smelter is the main source of sulphur dioxide (SO2) pollution in that airshed. In the air, SO2 combines with other compounds to form fine particulate matter (PM2.5).

According to the US EPA, exposure to SO2 and PM2.5 can lead to respiratory and cardiovascular health complications and even premature mortality, particularly for vulnerable groups such as children and those already suffering with asthma or Chronic Obstructive Pulmonary Disease (COPD).

In 2013, the MOE granted an application by Rio Tinto to amend its operating permit, allowing the smelter to increase its maximum SO2 emission by 56% from 9,800 t/yr to 15,000 t/yr. The amendment was part of a deal that gave regulatory permission for a long overdue smelter upgrade. The price of the upgrade, however, was that the smelter would be allowed to emit much more SO2 into the airshed than before.

The way the MOE granted the pollution increase concerned many in the community, including Lis and Emily. “I thought our provincial government had made concessions to a huge corporation on the backs of local residents by not insisting pollution control measures be implemented,” says Lis. “As an elementary teacher, I was concerned for the health of my students and believed I was in a good position to challenge the decision.”

Lis and Emily challenged the MOE’s decision to the BC Environmental Appeal Board. Soon, the two schoolteachers were joined in the legal fight by the local union representing the workers at the smelter.

The legal proceedings would consume six years and included not only an extensive five-week hearing by the EAB held in 2015 but also related lawsuits at the BC Supreme Court and BC Court of Appeal.

A key issue was the MOE’s decision to manage potential effects of SO2 on human health through an adaptive management program called an Environmental Effects Monitoring (EEM) plan. Under this plan, Rio Tinto could emit SO2 into the airshed until harmful effects on the human population shown to be causally linked to the smelter’s emissions are found, a link that may be more difficult to show as more industrial emitters enter the airshed in the future.

This EEM plan marks the first time in Canada that a government has agreed to regulate impacts on human health from industrial pollution through an adaptive management model. As lawyer for the union Jason Gratl described, the residents were being used as “guinea pigs” in a science experiment against their will.

Chris Tollefson, the executive director of the Pacific Centre for Environmental Law and Litigation (CELL) and a Professor of Law at the University of Victoria, was legal counsel for Lis throughout those six years. He explains that the MOE’s decision potentially infringed the legal protections guaranteed under the Canadian Charter of Rights and Freedoms.

“This case raises a key constitutional question, which is: Did the ministry err in signing off on the project to emit these harmful toxins into the air when the Charter says that all citizens have the right for their health to be protected by their government?” says Tollefson. “And we would say the Charter here has been infringed because government has not taken adequate steps to recognize and to protect citizens’ health.”

A breakthrough in the litigation came in summer 2019 when the parties to the legal proceeding came to a mediated settlement. Under the terms of the settlement, Rio Tinto’s permit and the EEM plan were rewritten to provide important improvements to the protection of human health for the residents of this airshed. Changes included (1) more robust ambient air quality monitoring network, (2) more stringent triggers for mitigation action, (3) more stringent implementation of mitigation action, and (4) the creation of a new, independent airshed group consisting of participants representing a broad spectrum of the community.

The case has been a transformative one for Lis and Emily and for the Kitimat community at large. “This case has been life-changing for me. Prior to participating in the case, I have always been content to be under the radar. This case has forced me to step up leadership-wise and become more public in the community,” recalls Lis. “I along with others have started a non-profit Kitimat Terrace Clean Air Coalition which has been very helpful for increasing community engagement and support.”

As this remote community is likely to undergo intensive resource development in coming years, including construction of an enormous natural gas processing facility, air quality will continue to be foremost on the minds of the residents. But with the airshed protections now in place through the settlement, Lis remains optimistic for the future.

“There will be more certainty for residents that industry SO2 emissions are under check with changes to the permit and EEM plan,” says Lis. “I think the community will hopefully regain trust in the decisions made by our public institutions.”

As for CELL, this case has been a great vehicle for training law students in public interest litigation. Over the years, CELL students were able to use this case to learn about how to develop and run a piece of complex litigation, including how to develop a legal theory, recruit expert witnesses, manage documentary evidence, and more. A few CELL students in the summer 2019 cohort even had the chance to participate in-person in the mediation sessions in this case, witnessing and learning first-hand how lawyers prepare for and conduct formal negotiations.

Grace Hermansen, a law student from Osgoode Hall, was part of CELL’s summer 2019 program and was one of the students who attended the mediation. After completing CELL’s program, she reflected on her experience with CELL:

CELL has provided a fantastic opportunity to help bridge the gap between law school and practice. The mandate of the organization is evident to any student working with the organization: students are being trained in litigation skills, ones that are difficult to learn in a classroom setting. I would strongly recommend CELL to any student interested in pursuing not only environmental law, but keen to learn more about litigating public law cases.